Blog:News/Wasteland 1 to be included in Wasteland 2 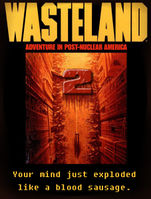 inXile has announced that the original Wasteland game will be included for free in the upcoming sequel, Wasteland 2.

Newport Beach, CA - July 10th, 2012 - InXile Entertainment today confirmed that Wasteland 2 will include the original Wasteland game that was released in 1987. The original RPG is considered the godfather of post apocalyptic games and went on to win numerous awards. Computer Gaming World inducted Wasteland into their Hall of Fame, and in 1996 they ranked it the #9 best game from a list of 150 games.

"The #1 request we had during our Kickstarter campaign was to have the ability to play the first game. Fortunately EA has continued to support us on this project and has granted us the ability to bring the original to the players," said Brian Fargo, of inXile Entertainment. "It is great to be able to make Wasteland available for those feeling nostalgic or who want to experience it for the first time. It certainly will not be a pre-requisite to understand Wasteland 2, but it adds some extra flavor if you did play the prequel."

Wasteland is a registered trademark of inXile entertainment