Wasteland 2 designer Chris Keenan has posted on Kickstarter an update #20 about attributes and skills that will be in game:

First, here is the list of attributes you can expect to find in Wasteland 2. Attributes are the starting values for your character traits. These are established when you create your character and can be different for each member of your party. Attributes are all passive, meaning that they won't be actively used in the world to solve issues.

You might immediately spot a few differences between this list and the original Wasteland. Perception has been turned into an attribute. We felt that perception tied into many other skills and played such an important role that it earned its position as an attribute. Also, there is this weird skill called Expertise on the list. Where the hell did that come from? Expertise is essentially agility and dexterity combined together into one package. We have defined it as the level of mastery of motions with your body and hands.

The following is the list of skills that can be used by the various party members. 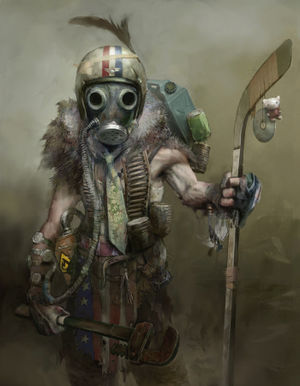 And to close out the update, here is a sweet little portrait to whet your appetite. I'd like to introduce you to one of the Wasteland raiders, a nasty resident of Los Angeles.