A radio tower in the middle of nowhere located East from the Ranger Citadel.

A small section of the Arizona surrounded by steep cliffs, the only feature of any importance is the radio tower that is still in operational shape, which the Desert Rangers had adopted into their communications network. Little else can be found here, though at some point someone built a small house, that was later abandoned again. There are also some caverns that have become home to the few animals.

Ace was given several repeater units by Hell Razor, and was tasked with installing these on 3 radio towers throughout Arizona to set up this network. His first stop was the radio tower, but after installing the repeater unit he caught by a steel monk. Ace was critically wounded in the encounter, but managed to damage his assailant enough for it to lose a leg and retreat to a cave, where it completely broke down.

After Ace's funeral, General Vargas instructs Team Echo to finish Ace's task, but also to find out the identity of his attacker. Their first stop is the radio tower, where they are to retrieve the missing repeater units and investigate the scene. 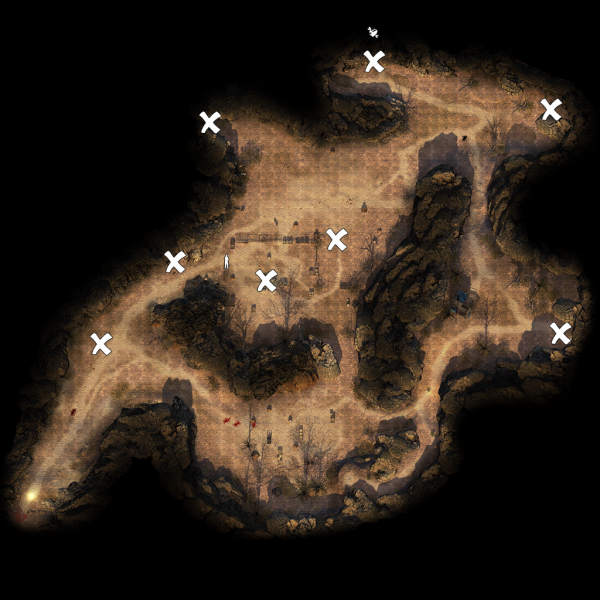 The area is simple, centered around the radio tower itself with a hooked-up radio repeater. When Team Echo arrives, it is under control by a bunch of fumbling raiders. The player can either dispatch them, intimidate them with Hard Ass, confuse with Smart Ass, or convince them to join the Rangers with Kiss Ass. (Any other nonviolent ways of dealing with the raiders now make them join the Rangers as well, you can also turn in for a reward as you would any other recruit) The last option also earns an additional reward from Evan Hawco. The radio tower itself can be repaired using Computer Science or Mechanical Repair for foreshadowing.