Rodia is a location in Wasteland 2.

Named after Simon Rodia, the creator of the Watts Towers the settlement was built up around, Rodia is called the Jewel of the L.A. Wetlands. It is one of the largest and most prominent producers of foodstuffs and clean, drinkable water in the Los Angeles metropolitan area. Under Mayor Sam Van Graas, it became a powerful economic influence in the region. It all changed in 2102, when the Mayor was persuaded by a roving group of leather jerks to hire them on as security detail for the settlement, to defend it against raids by Matthias' synthetics.

The Mayor didn't suspect that they were really interested in taking over the city. Under Dengler, the leader of the Jerks, all farmers were forced to start farming agave cacti, which then would be converted into tequila in the local factory. This caused a crippling shortage of food for the city, but when the Mayor wised up and protested, he was placed in a gibbet on the Rodian towers.

The situation is further aggravated by the mysterious illness spreading throughout Rodia, killing farmers every day and threatening to depopulate the entire city. A few enterprising locals have taken it upon themselves to find a way to restore order. When Desert Rangers came to L.A., one such man, Fred "Pistol Pete" Pettersen, saw the chance to liberate the city. 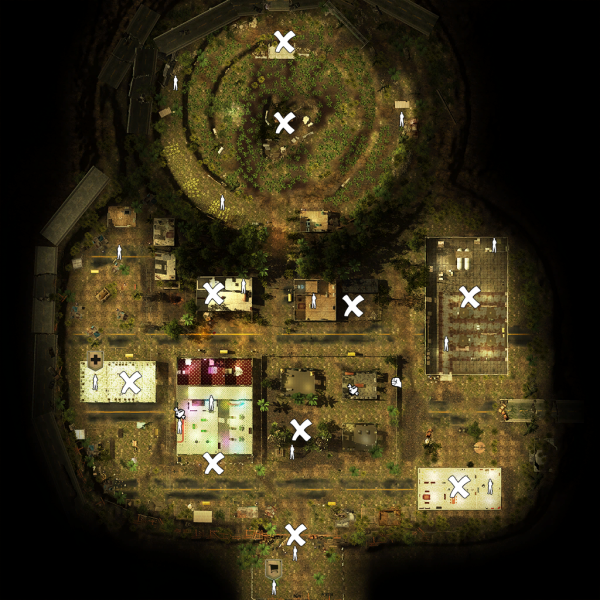 This is an interactive map. Hover over the markings for a description.

*Code 2 is the only one that has any story significance. The code itself is obtained from a document within the safe inside Rodia's distillery. The safe is positioned against the wall of the room where the player finds Christopher von Graas and the document inside reveals the code to be "2369"