Salt Lake Park is a location in Wasteland 2.

Home to Alex Dupre and his small farm, Salt Lake Park is a small area that remains peaceful and isolated from the troublesome wasteland - just like Alex wants it. He considers the outer world too crazy to be worth dealing with and so, he has sworn off all contact with it, except for whatever trading he does. Of course, he won't meet others face to face, no. He trades via a bucket where others pay scrap and he sends them weapons. Any attempt to run with the merchandise results in a rocket being send the way of the unfaithful customer.

Recently, Dupre has run into trouble. Honey badgers have attacked his cows and killed them, denying him much of his livelihood and forcing him to jack up his prices to compensate. 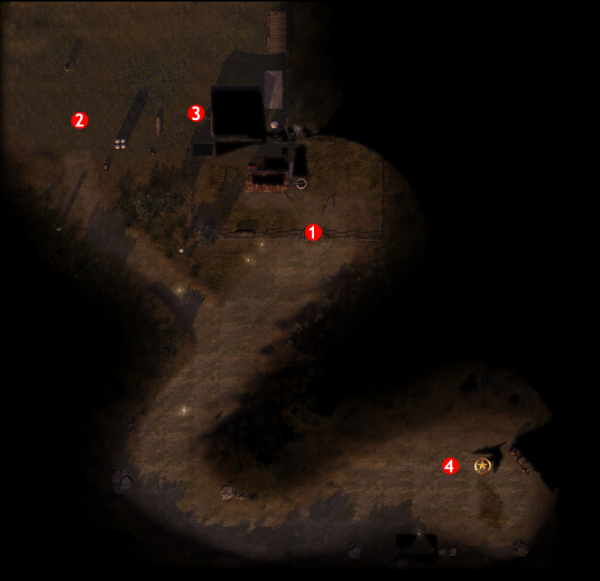 The small building right next to the entrance might seem tempting, but Rangers will quickly realize that the door lock is made of divine matter and the door itself is from the hardest metal known to man, impervious to brute force or explosives. The trick is to get the enemy Meson cannon to shoot in its direction, as it's the only weapon capable of opening the door through the sheer force of its blast. Simply place the marked Ranger in front of the door, wait for the robot to fire, and collect your reward.

Alternatively, you can break open this locked door with a Plasma Hammer, Proton Axe, or Flux Reaver.