Wittier Narrows Recreational Area is a location in Wasteland 2.

A small settlement in northeast Los Angeles, Wittier comes under attack from a small synthetic force once the Rangers gather enough cat litter bags to upgrade rad suits. Once they arrive, they realize they are in over their head: The Children of the Citadel have set up an ambush. Ten Evolved humans and a synth sharpshooter immediately attack, having encircled the Rangers.

The fight here is perhaps one of the toughest in the game, as Rangers start out of cover, surrounded on all sides, with synth melee specialists close. Surviving this requires heading for cover as soon as possible and coming loaded for bear. 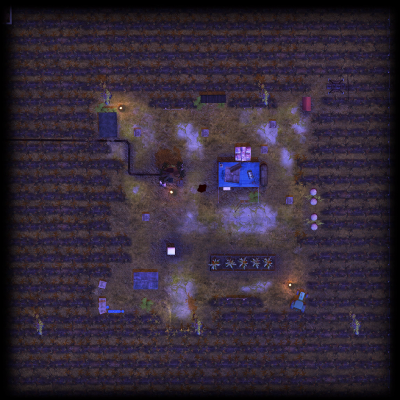 The area consists of a farmstead surrounded by fields with fences on all sides. When the player initially reaches the middle of the farm they will trigger a cutscene where the farm's resident apologizes to the rangers, insisting that "it's not my fault" before being killed by the synth ambushers.

Patrolling the perimeter will yield 3 buried items. There are no area transitions aside from the initial entrance.